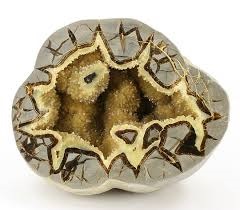 Ferroan dolomite crystals from this locality will occasionally show a multiple step growth habit. This habit has been seen on both straight and curved crystals and is quite common in larger crystals from the 2nd generation. Large plates of crystals showing this habit make for very attractive specimens. Crystals showing this habit appear to be an assemblage of smaller, epitaxially grown, “building block” rhombohedrons. Composite crystals up to 2 cm have been observed.

Rarely, a series of these larger rhombohedrons will also be epitaxially grown togetherbut this is not the norm. Smaller crystals from other generations will also display the multiple step growth habit, but are generally not as well developed and show far fewer steps. In general, this habit is more easily identified in sharper crystals such as those pictured to the left and right.

Twinned crystals of ferroan dolomite are observed with some frequency at the Monroeville locality. The majority of twinned crystals are curved saddle-shaped crystals, which form small flower-like crystal groups as previously described.

Intergrown or penetration twins of simple rhombohedrons are also occasionallyencountered. Penetration twins are two crystals which develop simultaneously and pass through each other along a twinning plane. This type of twinning occurs most commonly in the first three generations of ferroan dolomite growth.

It is probable that a small 2nd or 3rd generation crystal with negative rhombohedral modifications lies at the center of this form. While important to the paragenesis of the locality, this generation of crystals is perhaps the least aesthetic. 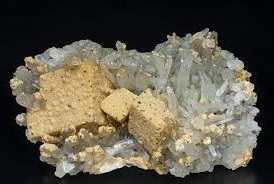 There are two theories as to how these crystals developed. The first is that these dolomite crystals developed simultaneously with or in place of the 5th generation of ferroan dolomite. However, the similarity in form suggests the possibility that the entire 5th generation began as dolomite and later altered to ferroan dolomite. In either case, very few actual dolomite crystals exist at the locality.

Only those crystals that are purely white in color or are white when broken should be considered dolomite. All others are more likely ferroan dolomite. The photos to the left and right display common examples of dolomite crystals from this locality.